What’s in a Nain? 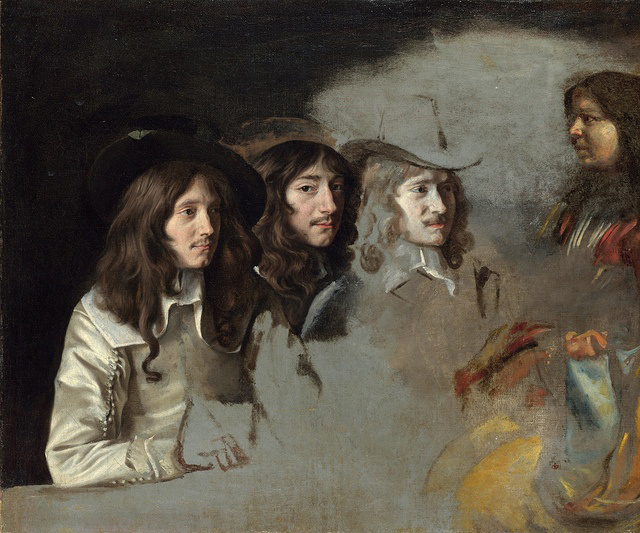 Recently we stumbled upon this wonderful painting, Unfinished Group Portrait-Three Men and a Boy (C.1647-48 ) by the Le Nain brothers (Freres Le Nain).

Not only were we intrigued by the unfinishedness of it, that eerie gray wash of fog, but of course we were fascinated by the three brothers themselves, who apparently painted all of their paintings together. The National Gallery, London, where the above is housed, has this to say about the brothers  “They worked in collaboration and it is not possible to distinguish their individual hands.”

And The online Britannica has this to offer:

The Le Nain brothers… are traditionally said to have worked in harmony, often collaborating on the same picture. The “Le Nain problem” of determining which of them painted what is complicated because no signed work bears a first initial and no work completed after 1648 is dated. Evaluation of the three personalities early in the 20th century was therefore based on what was traditionally known of each brother and on the dubious establishment of three stylistic groups. Art scholars today no longer try to attribute individual works, and the three brothers are treated as a single artist.

So often people we encounter are truly perplexed on how we create work together. Though collaboration is taken as a given in the other arts (can we say Coen Brothers, anyone?), in the visual arts collaboration is harder for the audience to grasp. We are often asked how we work together or more specifically who does what (we can call this Le Temple problem). Questions range from- “Who had the idea first?” “Who executed what?” Or even,  “Is this an Ashlee or a Holly painting?” But those are questions that we are unable to answer. The truth is: It doesn’t matter. We have found that in successful collaborations, and not just the partnership we have with each other, one usually can’t remember who exactly came up with what. There is a simply a synthesis, an epiphany, a solution that seems to just appear in the room.  We  believe that the creative thing (for lack of a better word) exists already and is seeking to manifest itself using us as a channel for its expression. Not the other way around.

For both of us it doesn’t matter which of us had the idea or who brings it into being. If one of us walks into the studio and moves an image around, or splashes some paint here or there, that particular manifestation doesn’t belong to just one of us because it was not possible to create it without the groundwork and history we’ve developed together. We are both planting seeds for one or the other to cultivate and in this way the process of our work is also part of the meaning of our work.

This all reminds me of what Elizabeth Gilbert mentions in her Ted Talk on creativity in that wonderful story she recounts about Tom Waits.

“…And he’s speeding along, and all of a sudden he hears this little fragment of melody, that comes into his head as inspiration often comes, elusive and tantalizing, and he wants it, you know, it’s gorgeous, and he longs for it, but he has no way to get it. He doesn’t have a piece of paper, he doesn’t have a pencil, he doesn’t have a tape recorder.

So he starts to feel all of that old anxiety start to rise in him like, “I’m going to lose this thing, and then I’m going to be haunted by this song forever. I’m not good enough, and I can’t do it.” And instead of panicking, he just stopped. He just stopped that whole mental process and he did something completely novel. He just looked up at the sky, and he said, “Excuse me, can you not see that I’m driving?”(Laughter) “Do I look like I can write down a song right now? If you really want to exist, come back at a more opportune moment when I can take care of you. Otherwise, go bother somebody else today. Go bother Leonard Cohen.”

The painting is hovering around our studio already. We are picturing it looking like that grey smudge in the Le Nain painting above.  It just wants either or both of us to  get it down on the canvas.

p.s.
We both wrote this!