Some Thoughts on the Tiny

Recently, we watched The Grand Budapest Hotel directed by Wes Anderson on a trip home from Europe, aboard the reliable but less than luxurious Aer Lingus. We found ourselves out of necessity choosing a film to watch in order to kill two of the ten endless hours that faced us. It is always the worst way to see a film – on the plane – especially one that promises to be a visual feast but having few palatable options we chose The Grand Budapest Hotel. We sat back (though only so far) with our  tiny plastic glasses half filled with very yellow chardonnay and, with sighs of resignation, we began to watch. We soon found ourselves absolutely enchanted and absorbed. How delightful was this movie! Though it was hard to hear the audio through our headphones and difficult to see  on that itty bitty screen, we felt that when it was over, we had spent time well in the company of a tale beautifully told.  The rest of the eight hours was the usual hostage-like misery, but we did feel that we had gained a small thing of value in seeing The Grand Budapest Hotel.

Upon returning to the States, we couldn’t wait to see the movie again on our larger television screens. Ah America! Expecting to enjoy the film more fully with clear sound and large images and more pixels, we found ourselves, once we were viewing it again, strangely disappointed.  Some of the magic was missing. Though we still liked it, the movie felt diminished. Those haunted rooms and train cars of by gone days and, my God, those beautiful pink pastries, now viewed bigger seemed…  well…  less. How could it be that we enjoyed it so much more on those tiny shitty screens of the airplane?  We pondered this, it bothered us, and then we realized those airplane screens are the same size as our wooden box assemblages. 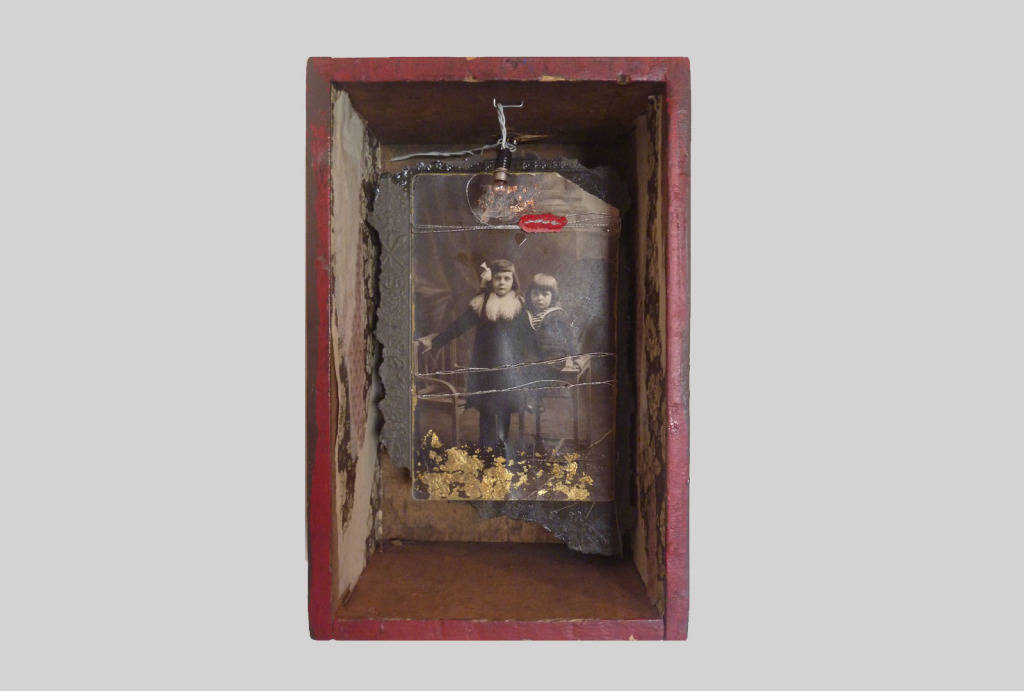 Esme and Jane with Light Bulb HOLLY and ASHLEE TEMPLE

Our boxes/assemblages are meant to evoke a lost world: a world constructed from bits of memory, story and maybe a touch of tragedy. We also try to give them a bit of the creepy in order to prevent sentimentality, much as we saw in The Grand Budapest Hotel. A sense of peering in. Focusing down. Of course, Wes Anderson films each frame like a box, holding the camera steady as we peer into his dioramas.

Of course, we also know that not many movies are meant to be seen small (although this is a good idea). Certainly, most films would lose too much, but we did recently become a little obsessed with another “movie” The Roentgens Berlin Secretary Cabinet.

Posted on FaceBook by our dear friend Maria, it has become a favorite: discover the hidden features and intricate interior of this cabinet. Somehow this strange little documentary-type video appeared and seemed to fall into place with what we had been thinking recently. The story within story within a story. These cabinets revealing cabinets behind secret doors. Tales within boxes and drawers. We like layers: layers of time, of story, of paper, of paint. We also like things tucked away and hidden to reveal all these things and leave us feeling a little haunted.  We have a vision of this video playing from a tiny projector into one of our wooden boxes. Just flickering away, perhaps alone at night, at the end of a long dark hallway.

And in case you are feeling this is all just getting a little too precious, too myopic, too just ooh ooh wee and diminutive, let us just share this:

But watch  “The Grand Budapest Hotel” on your your phone. Magic.